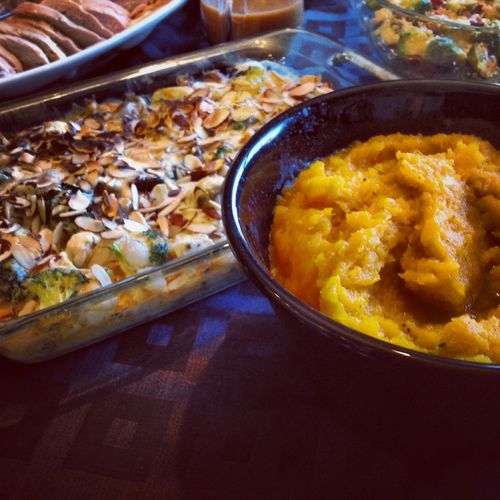 The best thing about Thanksgiving is the leftovers!  After spending hours of preparation on the perfect holiday meal to share with family and friends I get to reheat a second full T-day meal without the work – and it tastes delicious!
Three days later, I’ve had approximately three full Thanksgiving dinners, and a number of artfully crafted sandwiches and I’m turkey’d out. 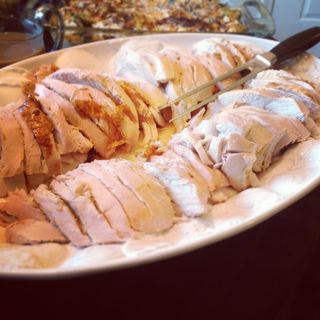 Being the frugal and creative person I am I can’t just throw out all the leftovers because I’m temporarily bored with the flavors and need to make space in the fridge. But right about now I don’t want to eat turkey until next Thanksgiving!  Okay, I know that’s an exaggeration but my taste buds crave to be tempted. 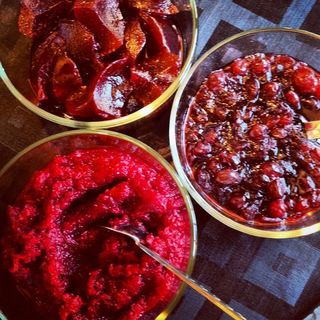 A great way to shake up those leftovers is to add spices.  Some of my favorites are turkey chili, pita pizzas and turkey & veggie fajitas.

What are your favorite holiday recipes? 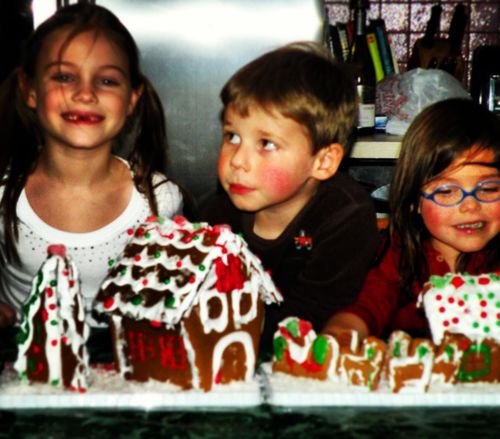 Julia, Nicholas and Maya with their favorite holiday treat.


Crisp days, early nights, a profusion of vibrant color, settling onto a carpet of grass. It is that time of year when being at home gives me a cozy and comforting feeling.  It is also the time of year when my brain is on overdrive.  Everything inspires and excites me.  New ways to wrap up my favorite goodies.  New recipes to try.  New twists for the classics.
The holiday season is both a time for relaxing and go go go.  To enjoy more of the former and less of the later I am taking a trip down memory lane.....
There are certain smells and tastes that bring me back to when life was simpler and the only thing I had to worry about during the holiday season was having fun.
Of course, being young, having fun meant being entertained and not entertaining myself by reading a book quietly.  No way, I wanted action.  No matter where I went all the action was in the kitchen preparing for holiday parties.
My mothers pecan tarts, my aunts special dill bread dip, my grandmothers famous apple pies and oodles of cookies that took hours to decorate or top with kisses.  When all the chaos in the kitchen was cleaned up we would sit with hot chocolate, sample the goodies and watch The Sound of Music.
No matter how old I get the holiday’s aren’t complete without taking the time to relax with cookies and hot chocolate while watching The Sound of Music.  The only difference now that I’m an adult is a special kick added to the hot chocolate - if you know what I mean.
Post your favorite holiday recipe and picture on our Facebook Page and receive a ten dollar gift certificate to use in our showroom or online this season.
More of our favorite holiday recipes:

Scalloped oysters was always a once a year treat in my family growing up; now I've carried on the tradition with my own family and it's become one of my husband and his family's favorite dishes at Thanksgiving. This will be my first year trying to make it gluten free so I'm trying to find just the perfect crackers to use. Anyone have any suggestions?

In the original (contains gluten recipe) that my Dad used - you use oysters, salted butter, Saltines and pepper. I never had a written recipe but here is a link to one that is pretty close.
http://allrecipes.com/recipe/scalloped-oysters/

I would not use Ritz crackers or buttery crackers of any kind, though because you are already putting butter in it and it's a very rich dish. (I use lots more butter, like maybe half a stick, however.) I'll try the Glutino as I think that might work. I would not use bread crumbs at all just as many crushed crackers as you need to cover each layer of oysters well and I would not use butter to grease the pan. Use an oil that does not burn like Avocado oil or something like that with very little flavor. You can go light on the pepper and let people add more.

I LOVE the Mary's Gone Crackers product but would not use them for this recipe as they would not absorb the liquid. I use lots more milk in mine and less of the oyster liquid but that's a matter of taste. I go about half and half milk and oyster liquid but if you are an incredible oyster lover the mix in the recipe might work. So how it works is that you grease the pan, put a little liquid down, then a layer of crackers, a layer of oysters, a layer of butter, a layer of pepper. What you end up with should be soggy but not swimming in liquid. The sides of the cooking vessel will be liquid at the top but the top is just damp not submerged in liquid.

Usually two or three layers of each ingredient is all you want. You don't want any more because if the dish is too thick it will burn on top before the middle is piping hot. By finishing with crackers, then butter you get a nice crisp top to the dish. We always have traditional dressing as well as this oyster dish and this is always the one that's empty first. Usually NO leftovers which is good because oysters don't keep that well. Most people ask for second helpings. I don' t ever use a metal container to cook this in as I think metal would be more likely to burn. Use glass or ceramic container to cook it in.

I use tiny bits of butter in layers rather than mixing crackers and butter together first, but the method in the recipe might work ok.

Serve the dish piping hot as the aroma is quite enticing if you like oysters.
You can reheat it and it keeps in the refrigerator for about 2 days, but I hardly ever have any left over to worry about.
so let me know if you have any questions and let me know if you try it, too, and how it turns out.
At our house it wouldn't be Thanksgiving without this dish. Of course if a person doesn't like oysters to begin with they are not going to like it.

PS on the scalloped oysters, I tried the GF version of the recipe on Sunday to make sure it would work for Thanksgiving with the relatives. Used Glutino's Original Premium Rounds. The crackers cost as much as the oysters but the dish was delicious, just as good as the original recipe.

Sticky toffee pudding, the recipe that I created is half the sugar and half the fat and it is amazing http://www.glutenfreerecipes-simple.com/#!sticky-toffee-pudding/c1max