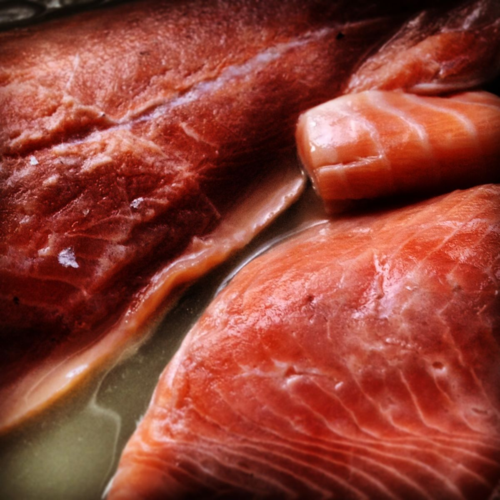 I went to bed thinking about this recipe.  I dreamnt, I dwelt and I awoke intent on making this dish.  That's wrong, this recipe is more than a component, it is the meal.  Many would be drawn to it because of the salmon.  For me it is all about the lentils and the sauce that you create with them. 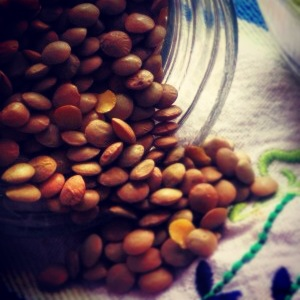 I adore lentils, they are rich and hearty. I did not know much about them until Mark and Kate moved to Moscow, lentil capital of the universe.  A gift of "The Lentil Festival" cookbook opened up a whole new world to me.  Who would have thought there were so many. Fiber, iron and protein make each variety an nutritional power house in it's own.  French green, or du Puy add a bit of richness and pepper to the plate.  Originally grown in the volcanic soils of Puy, France; they are delicate and considered by many to be the crown jewels of this arm of the legume family. 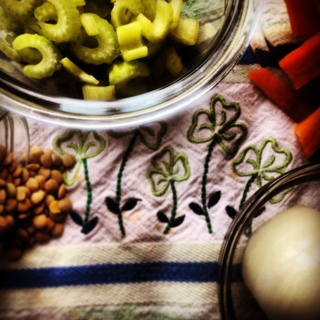 While preparing the first portion of this recipe from Dorie Greenspan's recipe from Around My French Table I did a couple things differently. The French lentils in my pantry went missing so I reluctanly substituted brown lentils from the Palouse in Idado.  I doubled the carrots and celery and cut them in smaller pieces, but not a dice.  When the lentils were tender I used a potato masher rather than separating the broth and using a food processor.  Now that I have done that I am simmering the lentils for another 10 minutes.  The aroma is intoxicating, causing me to think there many be far fewer lentils when the salmon arrives with my dinner companion. Thank you Dorie!

You will find this recipe on page 300 of Around My French Table.  For an offshoot try Barramundi with Rice & Lentils. 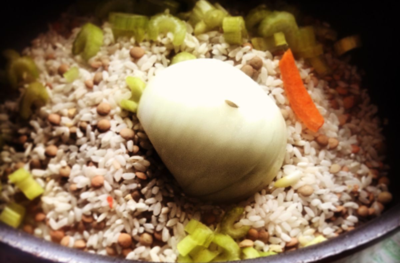 james pitt • I love that passion. It's inspiring.

Hope you enjoy the final outcome!

I like the idea of using a potato masher... so much simpler and less cleanup!

I like the idea of the potato masher, too. Next time!

Thanks Hope, Adriana and Cher - One pot everything is my thing. I don't mind doing dishes, but I can't stand clutter. So I am here thinking about the lentils and still waiting for the man with the Salmon... Fridays!

Interesting idea with the potato masher. I have learned to use the masher to make egg salad, works
wonders. I used to have a great egg 'grinder", have no idea where it is, and tried the potato masher
one day and found it works just as well. Glad you enjoyed the recipe.

I liked the tutorial on lentils. My du Puys are sitting on a kitchen shelf in another house so, unable to find any in the little community of Cambria, California, I just used green lentils. They were good. Love the masher idea. How did the salmon come out? I loved roasting mine. Experimenting with salts at my house and liked the one I used on this piece of salmon.

My salmon was delicious, but it arrived quite late so I have no good pictures. A couple extra things I did was to roast it on buttered greens and to add slices of lemon to the tops while it was roasting.