Pastis and PEI Oysters Rockefeller on a steamy summer day 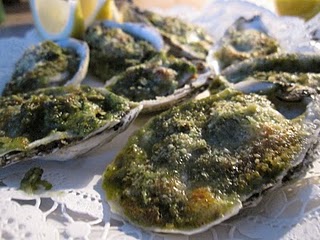 I was thinking of food when I awoke.  An elaborate coconut crusted fish dish with a tempura style dipping sauce.  Then I walked out of my air-conditioned room and became far less ambitious.  It is another summer day that appeals for a slow pace.

My plan changed from a big late dinner to a lazy afternoon of nibbling on small plates.  I have spent a fair amount of time in the south of France and have grown to love they way they wile away the heat of a summer day, sipping and grazing.  Time spent at the Albaret's villa in the Languedoc infused a love of oysters and Pastis, a drink that has been romanticized for me by Peter Mayle.  Those pleasant thoughts brought me back to my newly beloved Prince Edward Island. 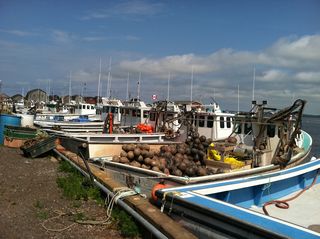 up  a bottle to bring home.  A day later we drove along a series of winding unpaved roads to make it to the famed Malpeque Bay for the sole purpose of enjoying their oysters over looking the small yet pristine harbor.  While you won't find many days of 100 plus heat on PEI, the island provides the essentials to make the most of one at home.

Adapting another recipe from Tourism PEI, this is a savory and salty fare is a terrific accompaniment to that a chilly licorice infused Pastis on a steamy hot day....

Using Kosher or rock salt to make a bed to hold the oysters during cooking keeps the shells from tipping, spilling savoury juices and also keeps the oysters hot as they go to the table. For presentation, use an oven-to-table baking pan which will held 1/2 inch of salt.

Preheat oven to 400 degrees F, then place baking pans, with layer of salt, in oven to heat. In a skillet, melt butter, saute parsley, watercress or spinach, shallots, celery and green pepper. Cook 5-6 minutes over medium heat until watercress or spinach is wilted. Stir in remaining ingredients, except the oysters, adding a little extra cream or bread crumbs as needed to achieve the consistency of a thick sauce. Spoon the watercress or spinach mixture over each oyster meat, dividing evenly. Place oysters in baking pan, return to oven and bake 4-6 minutes or until hot and bubbling. Makes 10 appetizers or 4 main course.

If you are into oysters, you should read “The Big Oyster: A Moluscular History of New York” by Mark Kurlansky - I have just finished it. It is history of the rise and fall of the NY oyster industry and has lots of very interesting historical oyster recipes too.
Posted by Dominic Lockyer

If oysters are your thing:

This looks delicious. I may have to try it sometime soon.

I also like the photo of the boats; you have a good eye for detail.