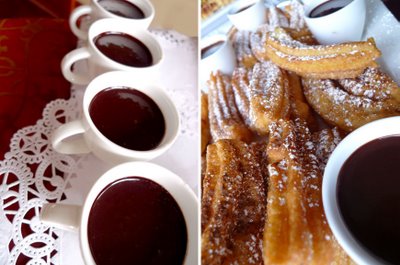 The Spanish know how to eat.  There is something sexy and sublime about sharing small plates of food. Ending a meal with steaming mugs of chocolate, fruit and biscuits to dunk into them is a lovely way to celebrate with those you hold dear.

The history of this divine delight goes back centuries.  After conquering the Aztec's and destroying Montezuma's armies, Cortez settled the Yucatan as a Spanish colony.  This afforded him the chance to learn how to process chocolate. These secrets were brought back to Spain where the court of King Ferdinand and Queen Isabella added sugar and honey to the bitter recipe.

For close to one hundred years, chocolate was held as a secret delicacy of the Spanish Monarchy. During this period the newly found spices of cinnamon and vanilla were added to the drink, which they also began to heat. By the early 1600's, the monks who had been consigned the job of processing the chocolate and the daughters of the Spanish kings who were wedded to foreign royalty had spread word of the delicacy to the ruling and religious classes throughout Europe.

Place the chocolate and half the milk in a pan and heat, stirring, until the chocolate has melted. Slowly pour the beaten eggs and remaining milk into the pan. Cook on low heat, whisking constantly, until the chocolate is thickened, about five minutes. Take care not to boil the mixture. Remove and whisk smooth. Pour and server in cups or bowls for dunking churros, scones or fresh fruit.

For the Love of Chocolate

What you  had to say:

Julie - Right on. I've had the privilege of spending a lot of time in Madrid and have video blogged from there several times. Here is a favorite moment among the Madredista's in the Museo del Jamon.

Posted in For the love of Chocolate, Great Recipes to Dip Into, The dish on Dessert | Permalink | Comments (2)

Looks very, very tasty. You know there's a special way of making dark chocolate in the Sicilian city of Modica that melts wonderfully and often already has vanilla or cinnamon added that is said to come form Southern Spanish traditions, but I have not found a source that confirms this.

Thank you for sharing that. It is such a lovely tradition. Please keep us in mind if you find out more!