Belgian-Style Breakfast Bread
What is your favorite food? 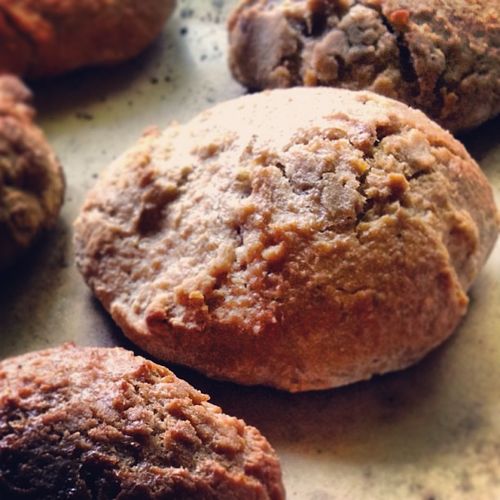 I believe I have been detered from making bread on a regular basis because of the thought of the work involved.  Not that it is actually a lot of work.  It is the idea of the kneeding, the waiting and possibility that it will not rise.

The I was listening to old podcasts from the Splendid Table and learned about several different no kneed methods.  After reading a piece about it by Mark Bittman in the New york Times I was hooked on the idea.

This recipe can be made with traditional all purpose flour instead of the sprouted spelt.  I adapted it from the basic recipe in Jim Lahey's, My Bread (below).  Honey was added because it helps the spelt to rise better, you do not need it when using traditional wheat flour.

Thoroughly combine flour, salt and yeast.  Add the whey or water and honey.  When mixed the dough will be sticky.  Cover loosely and allow to rise in a warm environment for 12 to 18 hours. 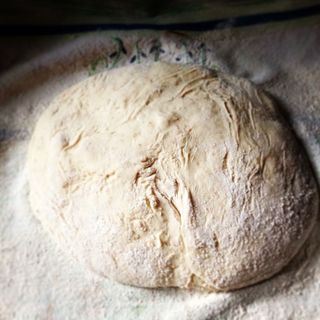 Dust a tea towel with flour and remove dough from the bowl.  Stretch the dough and then fold it back together, leaving the crease resting on the towel.  Fold towel and let bread rise for two more hours in a warm environment.

If you are going to do a stuffed bread; after the first rise, stretch the dough out on a lightly floured surface.  Top with the stuffing ingredients and roll up dough.  Cover with a towel and let rise for 2 hours.  You can either bake it in this form or twist it in to a circle and place in your cast iron pot.

After 90 minutes of the rising time place your pot or baking stone in an oven that has been preheated to 475 f.  When the dough finishes rising, carefully slide it into the hot pot.  Bake in the covered pot for 30 minutes.  Remove from the oven.  Check to see if the internal temperature is 200 f.  If it is and the bread has browned to your liking it is finished.  Should you want a darker crust put it back in the oven uncovered for 15 minutes. This recipe makes a crusty bread with a soft inside.  If you like your crust soft put a damp tea towel over the pot and then the lid back on the pot.  Allow it to sit this way for 30 minutes.

For more on my search for the perfect bread...

What I'm experimenting with;

When the fruit and nuts are evenly distributed, roll up the dough and place in a dusted tea towel.  Allow to rise another 2 hours.