My search for the perfect bread.... Since I listened to a Splendid Table podcast last year about No Kneed Bread I have been trying to master it.  The interview was with Jeff Hertzberg and Zoe Francois of Artisan Bread in Five Minutes Fame (below).  I had been playing around with gluten free flours until my bread machine broke.  The results were always un impressive.  The idea of a dough you could keep in the fridge and use bits of as needed really appealed to me.  But again I was not thrilled with my results.  Always the bread was incredibly dense, very yeasty and too salty for my taste.

I admit to this being an obsession.  My mother was starting to fear I am becoming a kind of mad scientist, making her look at the reaction of each different flour to the rising process.  Through the winter and spring I took a break.  Then I read a piece by Mark Bittman in the New York Times and  Lynne Rosseto Kasper interviewed Jim Lahey of New York City's famed Sullivan Street Bakery, the true originator of the no-knead bread technique.  His theory is to use little yeast and let the bread rise slowly. He also cooks the bread in a super hot oven with a dutch oven. I tried my best mix of flours using a small cast iron pot I had and found much better results.  But my bread was still very dense. 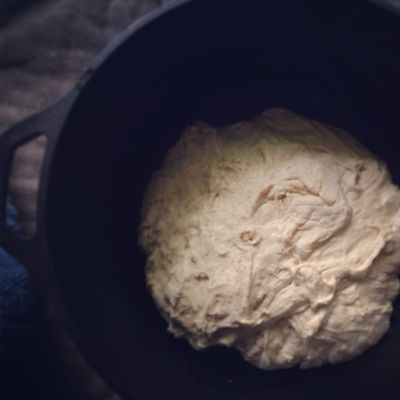 This summer I finally bought his beautiful book, My Bread and invested in a cast iron dutch oven (made in Tennessee no less).  The investment has paid off in spades.  The first bread was a mixture of corn, rice and arrowroot flours which we use for our baking mixes with fantastic results.  It did not rise like I wanted so I broke down and made a loaf with King Arthur, all purpose flour.  It was like the dough jumped out of the beautiful book.  After all my trials and tribulations I had the perfect dough and even more beautiful bread.  So I needed to find a gluten free flour that had a different makeup.  After much research I found an Organic Sprouted Spelt Flour.

Spelt is thought to have been grown in Iran as long as 6,000 years ago.  Higher in protein than wheat it was popular in Europe centuries ago but lost its favor to wheat and was reduced to being used as a feed grain for animals.   Spelt has a similar look to wheat but is far more easy to digest.  While it's has less gluten than wheat it still contains trace amounts and not every person with gluten sensitivity can tolerate it.  I am fortunate that I can.  This particular flour is also superior because sprouted flours are also far more easy to digest. 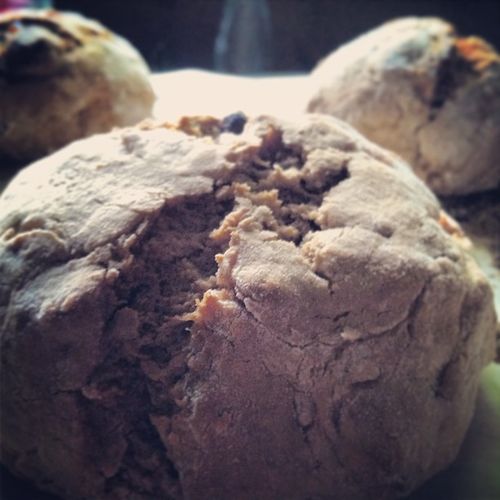 As I experiment I will try more flours in search of the perfect gluten free recipe and add links here.  If you own a bread machine, give Jim Lahey's method a try.  It just might make you consider donating that counter clutter to the Goodwill.

What I'm experimenting with;

When the fruit and nuts are evenly distributed, roll up the dough and place in a dusted tea towel.  Allow to rise another 2 hours.

Posted in Bread like no other, Gluten Free | Permalink | Comments (2)

I am interested in finding a gluten free recipe for bread made in the Jim Lahey manner. Did these work? What about quinoa flour? There are no dates in this blog, so not sure if it is still active.

I apologize for taking so long to get back to you. Your question got lost in a field of spam.

Yes these recipes worked. The breads get dry with age. My favorite is simply to use a sprouted spelt flour which I am able to tolerate.

I hope that helps.
Happy Thanksgiving.