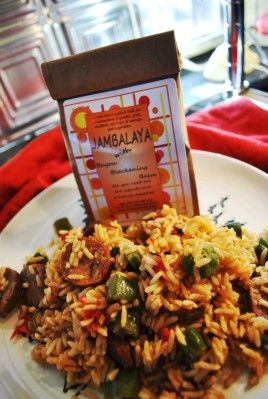 Jambalaya is a staple of creole cooking. Early settlers to Louisiana were French and Spanish and this dish is a prime example early American fusion cooking. It's name stems from the french "jamba", or ham and the Spanish "paella", or rice dish.  Originally the dish was cooked in the big black pots, used for boiling syrup from sugar cane, on an open wood fire with boat oars for stirring. While it's name refers to ham, recipes often exclude it.

To this mixture add:

Bring to a boil and simmer, covered, for about 25 min. If you prefer to microwave, stir in liquids and cook in a microwavable bowl on high for about 20 min or until rice has softened to desired consistency.

To make the most of this mixture add your choice of onion, peppers, meat, pork, beans, shellfish and or sliced vegetables. When embellishing this mix simmer for another 15 min or until all ingredients are cooked thoroughly.

The comments to this entry are closed.

What people love most: